Designed from the ground up to be the most customizable and versatile drum library anywhere, Ethereal Drums is the ne plus ultra of virtual acoustic drum instruments.

All samples were recorded with reference mics in a small, acoustically-treated room with no compression, EQ, or processing applied. 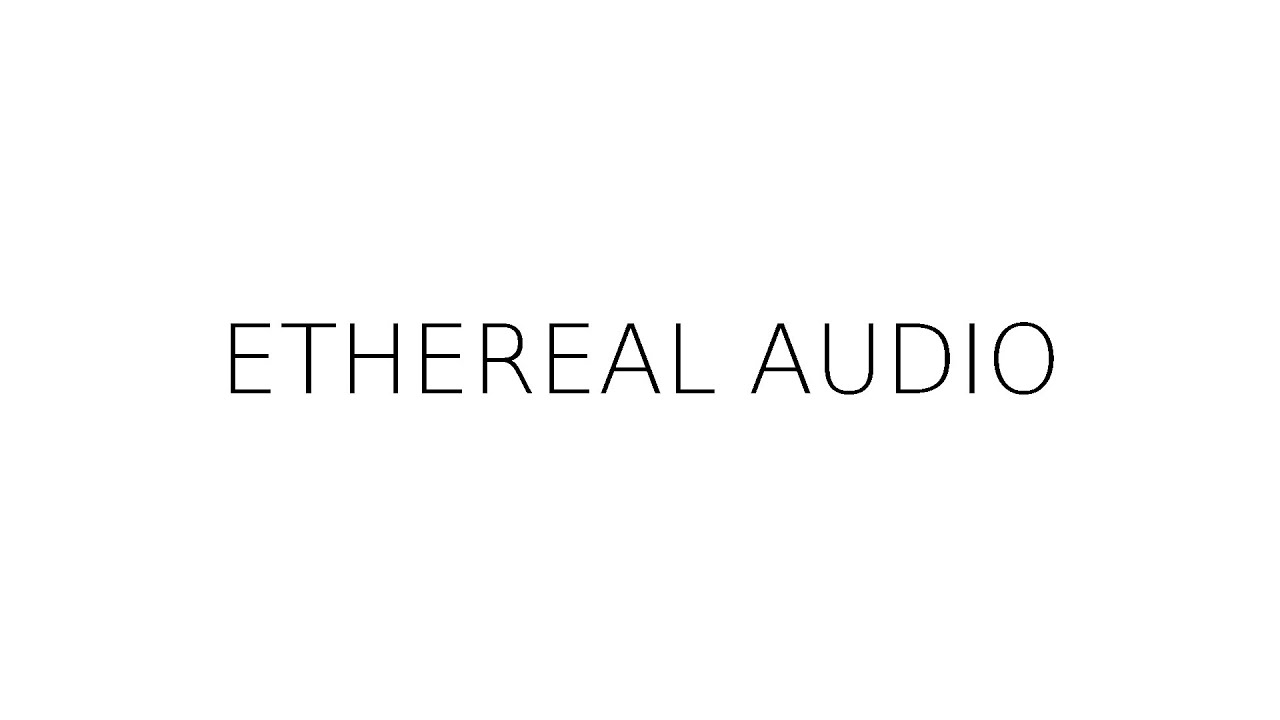 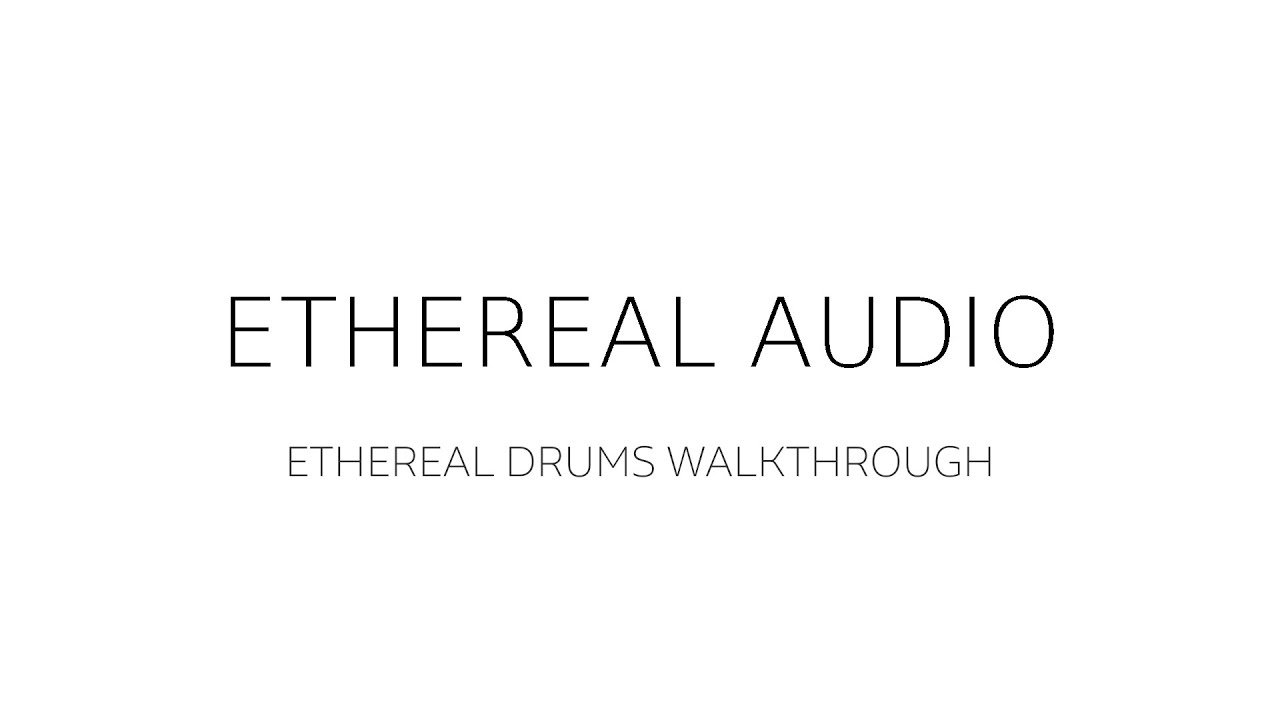 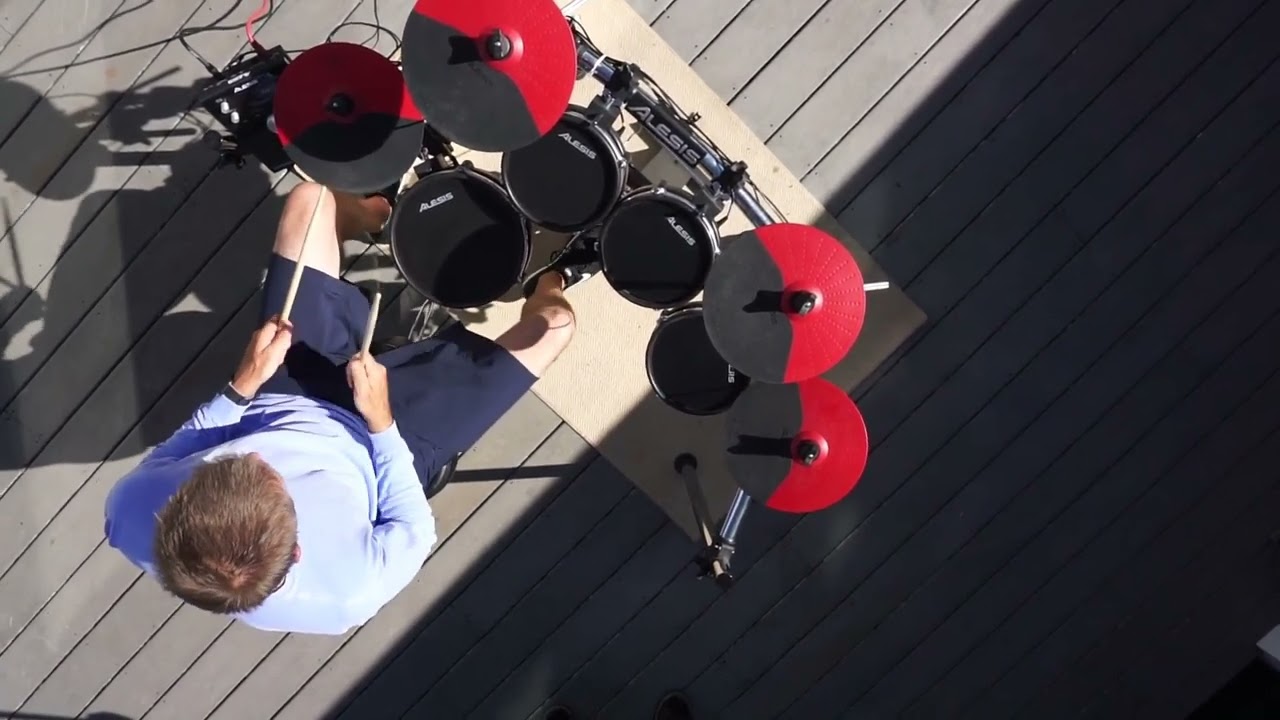 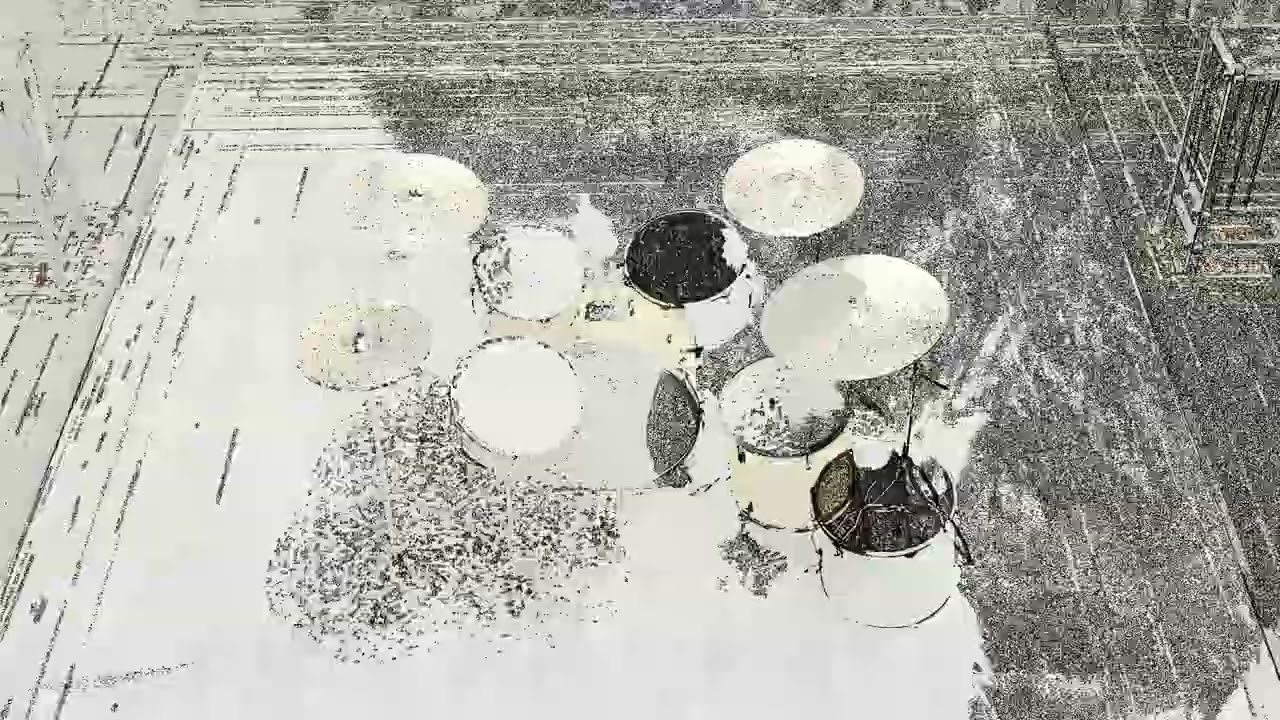 Designed from the ground up to be the most customizable and versatile drum library anywhere, Ethereal Drums is the ne plus ultra of virtual acoustic drum instruments. All samples were recorded with reference mics in a small, acoustically-treated room with no compression, EQ, or processing applied. A proprietary template was used to capture the complete dynamic range of every kit piece, resulting in over 75,000 samples across 10 kick drums, 10 tom drum configurations, 9 snare drums, 2 hi-hats and 9 cymbals ($30,000 worth of gear); reduced to 17,263 samples by consolidating control to an intuitive axis knob, and reduced to a 5gb library size by using Kontakt’s NCW lossless compression format. This means every kit piece is available from one interface, and the resulting instrument is far less RAM-intensive than most virtual drum solutions.

This comprehensive and surgical approach allows for the very fine manipulation of the drum kit’s sound, making it equally suited for heavy metal, jazz, or any genre whose dynamic and stylistic needs may fall in between. In addition to a fully-featured mixing console with volume, pan, phase, EQ, compression, and transient control offered per channel from within Kontakt (as well as per-channel ADSR and tuning controls), users have the ability to manipulate the acoustic space in which the kit is placed; using 1,260 impulse responses taken from 10 real acoustic spaces, as well as the ability to change microphone used per channel with built-in microphone modeling technology.

The vast potential of this approach is encompassed across 50 kit presets, spanning dozens of genres, and the 400 included MIDI grooves that can be previewed from the instrument’s built-in, DAW-synced MIDI player.

Axis control: The axis control lies at the heart of the design in Ethereal Drums. Conventional drum libraries with a similar number of configurations can be hundreds of gigabytes in size, and in pursuit of giving the user as many tonal options as possible, complicated schemata like bleed matrices are offered as a way of controlling the attenuation of each microphone going into each drum sample. The consequence of this is an exponential increase in the size of the library; every audio file in the original recording process is passed into the end instrument, multiplying the storage size and RAM requirements of the library by the number of microphones used in the sampling process.

The axis control in Ethereal Drums controls an equal power crossfade on each channel between the monaural direct microphone signal and the stereo sum of all off-axis microphones. At center position, both signals are balanced exactly the way were when they were originally recorded; movements to the left and right respectively advance the ratio of signal toward the on-axis or off-axis signal of the drum sample. This achieves two effects: a more than fourfold reduction in the file size of the library (from over 75,000 original samples to 17,243), and a highly-intuitive tonal control that shapes the sound of each kit piece in a way that inspires. A radically different character can be obtained from the same tom drum (from tonally-centered to getting more resonance from the room), same snare drum (from a honky tone- more centered on the fundamental, to a wider sound- more centered on the wires), same kick drum (from a low thud, to more beater sound and more sympathetic ringing from the kit).

Room virtualization: If axis control lies at the heart of Ethereal Drums’ design, room virtualization is the logical extension of that concept. Effective drum miking with live kits converges on the nexus of two concepts: control and phase coherence. Control is the level of influence which can be exerted on a drum mix after it has been recorded, and phase is the relationship of two or more signals coming from microphones on the same sound source. More control means adding more microphones around the drum kit, which means control runs contralaterally to phase coherence: because there are multiple sound sources on a drum kit, it is physically impossible for every microphone to be equidistant from each sound source, and phase cancellation will therefore always occur. This can be managed with reasonable compromise when using close mics and techniques which emphasize the intelligibility of important kit elements- positioning overhead microphones equidistant to the strike position on a snare drum, for example, will result in a more stable snare sound. If not managed well, results can quickly become erratic and disruptive- pulling a room microphone up in a mix may add ambience, but subtract energy and impact from the direct mics, alter the stereo image of the kit, or cause a collapse of the signal on mono playback systems.

However, the character of acoustic spaces is a very desirable thing when it comes to drums! The sound of the drums on Motown Records is the composite of the players, the equipment, and the unique acoustics of the Hitsville U.S.A recording studio. The incredible sound of the drums on Led Zeppelin’s When the Levee Breaks is the result of John Bonham being recorded at the bottom of a stairwell with microphones at the top. The drums on the Black Album by Metallica were famously recorded in a large room with dozens of microphones around the kit. How then do you achieve those effects in a sampled drum kit?

The solution for us was to exhaustively sample 10 real acoustic spaces, and interpolate the information from those samples into 126 impulse responses per room – creating a true room mic that can be positioned to taste.

Because the drums were captured in a small, acoustically-controlled room, the kit can be positioned seamlessly into any acoustic space without risk of multiple reverberant signals clashing. And because the impulse responses are completely unmoored from the original recordings, there is no risk of introducing phase cancellation. With ten spaces to choose from and the ability to artificially expand or contract the size of each room, you can breathe the perfect amount of life into any drum performance.

Microphone modeling: All pieces were captured in a heavily acoustically-treated room with the Earthworks DK7 drum microphone system. To model the other microphones offered, they were placed in the same environment and a combination of sine sweeps, white noise bursts, and snare drum strikes were used to create an audio data set. A general regression neural network was then trained on data from the different microphones, and the average frequency response and transient sensitivity needed to translate the reference microphones into each of the modeled microphones was then interpolated into impulse responses. The end result, while not identical to using a different microphone, comes extremely close; close enough to pass a blind A/B test! 13 microphones have been modeled in addition to the original unaltered signals, giving yet another intriguing way in which the sound of Ethereal Drums can be shaped to your needs.

Standard mix options/ADSR/Tuning: As well as microphone modeling and room virtualization options, a fully-featured mixer with all the conventional options you would find in a DAW are offered, allowing all the mixing to be done from within Kontakt. This includes volume control per channel, panning, mute/solo/phase, an SSL-style 4-band EQ, a transient controller, and an SSL-style bus compressor. As well as conventional mixing options, per-channel ADSR is offered, send values to independently-controlled room and reverb channels, and tuning control over any kit piece in a range of 5 semitones above or below. If more processing options are desired, channels can also be routed out of Kontakt to separate channels in your DAW, allowing the kit to be processed and mixed the same way a live kit would be.

Unique options for each drum.

Kick: An analog-processed kick function is offered, which toggles between the original split signal of the kick and subkick microphones (split if additional attenuation is desired), and the summed kick signal of each sample being processed through an outboard analog chain. Although the processing changed slightly from kick drum to kick drum, each signal was passed through Pultec-style EQ processing, compression, saturation, and targeted comb filtering to generate a processed kick drum sound which, although it comes from the same source material and samples, sounds radically different than the unprocessed source, and would be extremely hard to recreate using standard DSP processing.

Snare: A reduce fundamental function is offered, which targets the fundamental frequency of the active snare drum and pulls it out with a very precise gain-compensated comb filter; effectively removing the melodic portion of the snare, and making it sit much more nicely in the context of a mix where the melodic portion may be out of key or interfere with the harmonic content of the material.

Hi-hat/cymbals: A variable choke speed function is offered, which allows the user to independently set the cut-off speed of cymbals being choked by hand, or the speed with which open hi-hats are choked by closed hi-hats.

Toms/cymbals: A moongel function is offered, giving the ability to deaden toms and cymbals to taste as though you were adding moongel. Samples of undampened and fully dampened toms were used as a reference to create a physical modeling process, whereby the dampening could be simulated in a way that lets the user set any decay characteristic they want independently for each tom drum. The same process was applied to cymbals, and a technique that lets the user do targeted overtone reduction was developed to remove ringing without affecting the decay curve of the sample.

Customizable to any hardware, any workflow.

Per-channel velocity curves: Over the course of development for Ethereal Drums, various electronic drum kits were tested- some of which had limited options in terms of setting the dynamic sensitivity of the playheads, and performances could become become either dynamically-inconsistent (encompassing a too-wide range of MIDI velocity values) or overly-consistent (almost all MIDI data resulting in velocity 127 coming in). To compensate, per-drum sensitivity can be set and saved from within Kontakt, allowing the user to match their drum sound to their playstyle.

Custom MIDI Mapping: All 31 drum articulations in Ethereal Drums can be assigned to any MIDI value. The default mapping follows the General MIDI Percussion key map, with mappings for Superior Drummer, Addictive Drums, and BFD3 also offered. This allows Ethereal Drums to work seamlessly with existing arrangements and MIDI files written for other software. Custom user mapping can be saved from within Kontakt as well.

50 presets are built into Ethereal Drums, spanning dozens of genres and ready to go immediately into your productions. There are 400 unique MIDI grooves, spanning everything from disco and big band to metal and world music. These can all be loaded from the built-in MIDI player, which will preview and automatically sync performances to the beginning of bar lines and keep them synced to the tempo of your DAW. When you find a MIDI groove that you like, simply drag and drop the MIDI file into your session. As much as Ethereal Drums can be tweaked and customized to whatever specific production and playing needs are required, clicking between presets and the included grooves is fun and highly encouraged!

Be the first to review “Ethereal Drums” Cancel reply

No data was found