by Silence And Other Sounds

Maleventum 2 by Silence And Other Sounds: Arcane Flutes of Native America is a Kontakt library inspired by ethnic flutes from ancient native American pre-Hispanic cultures.

Following the popularly acclaimed Maleventum 1 based on Viking war horns, we’ve collaborated with Nomada Ceramica, a collective of musicians and instrument makers from Argentina, committed to faithfully reproduce flutes from the Aztec, Maya and Incas civilizations of over 3000 years ago.

Silence And Other Sounds 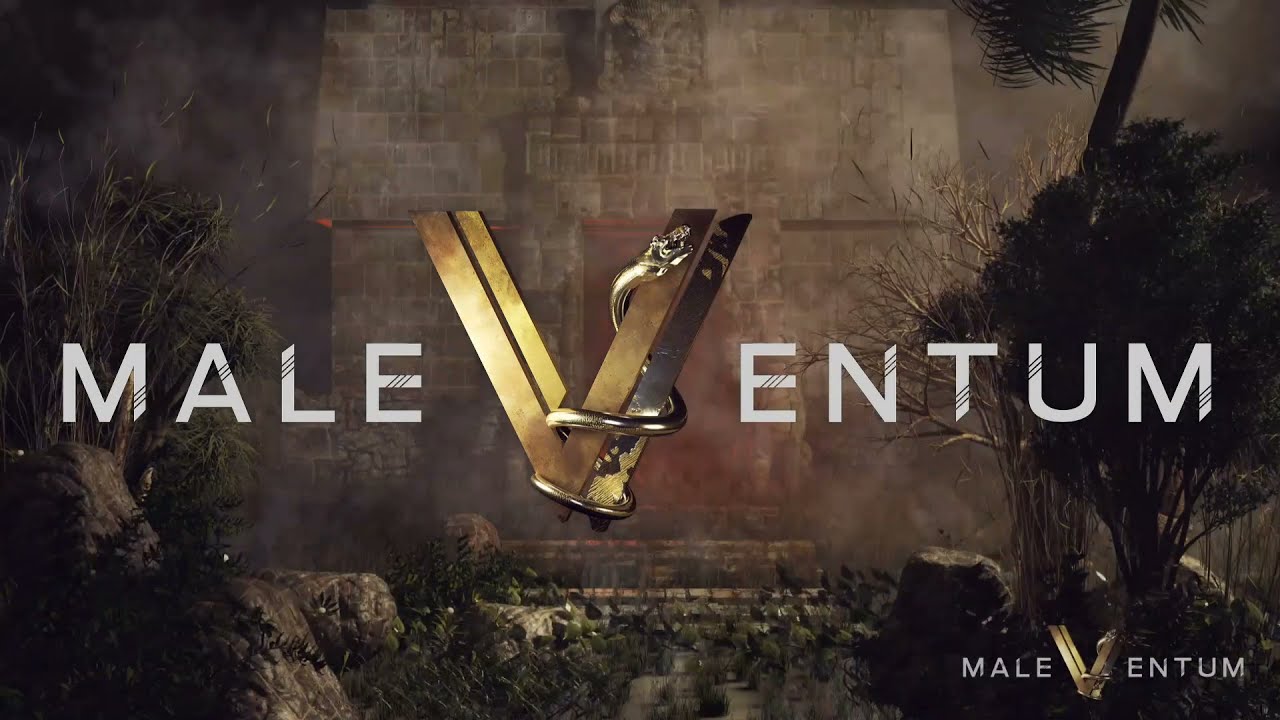 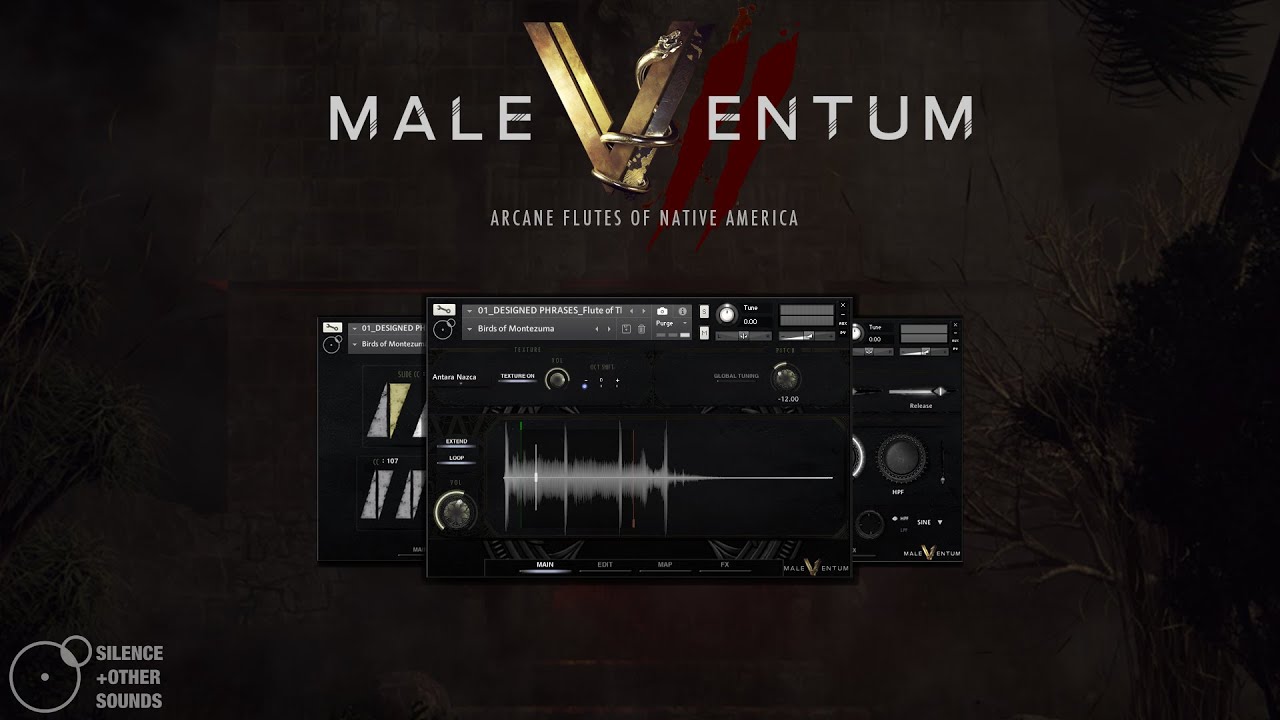 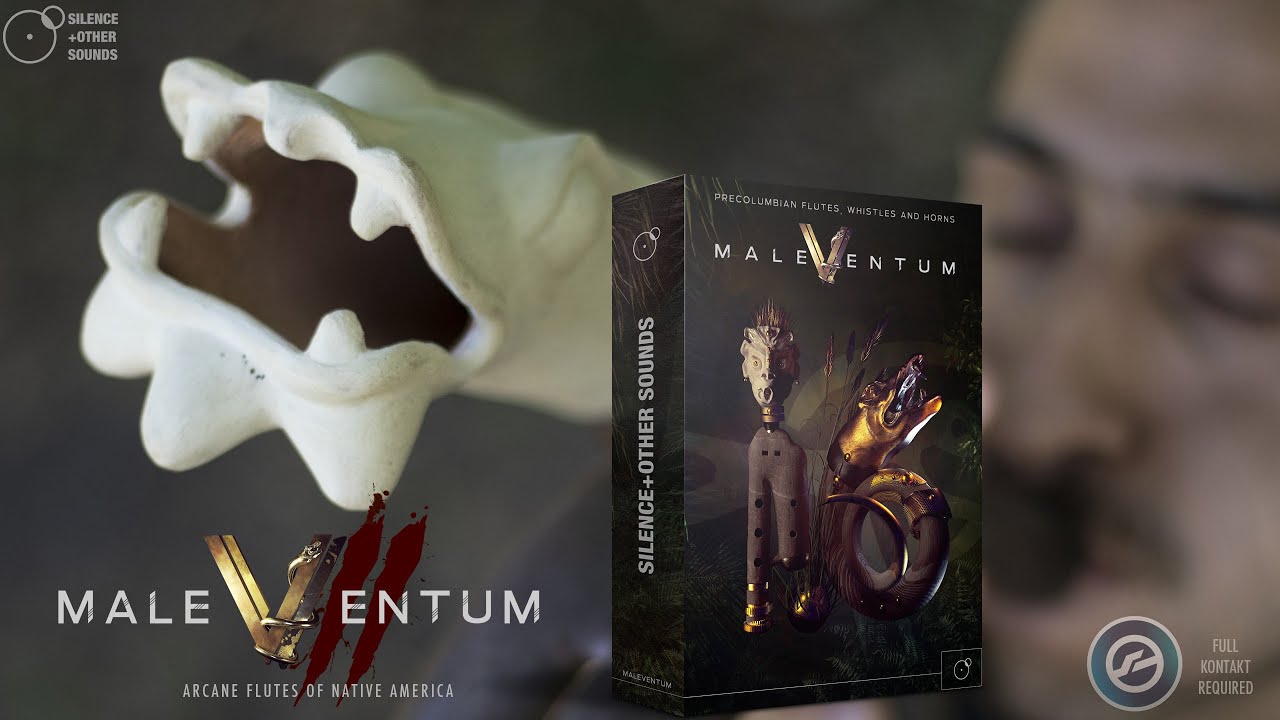 Maleventum 2 - Sounds of Deep America - Behind the Scenes 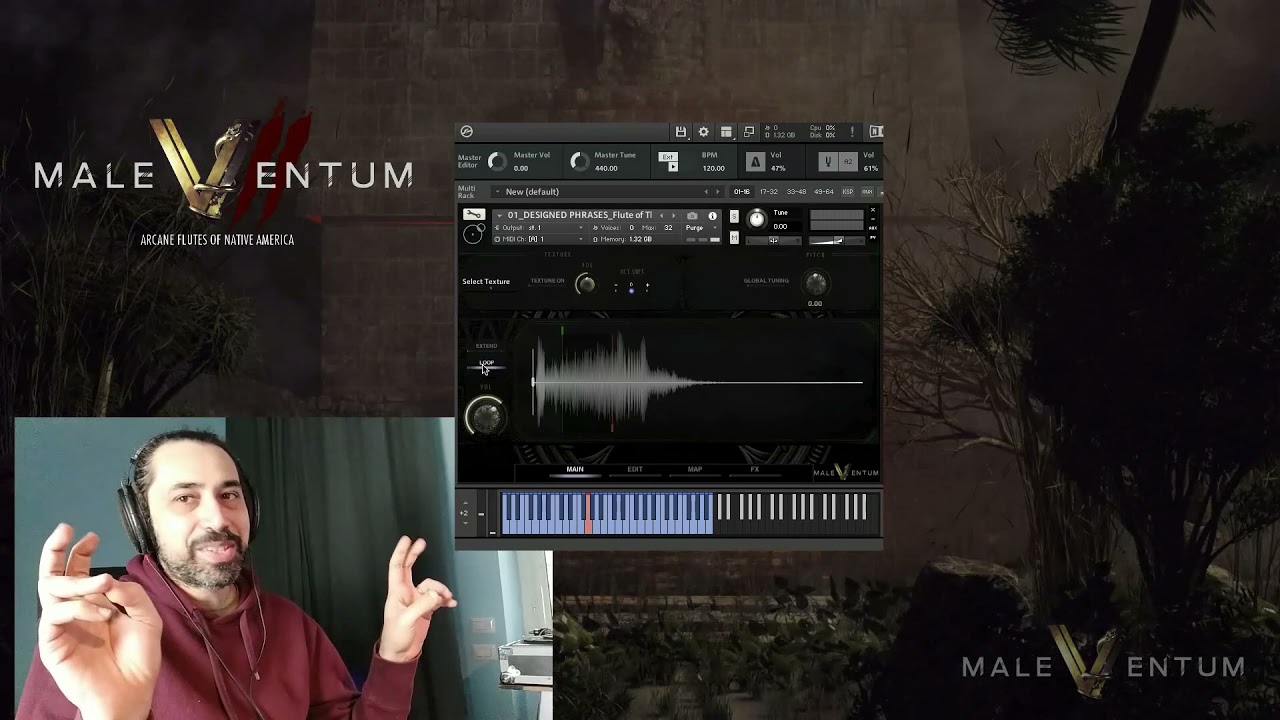 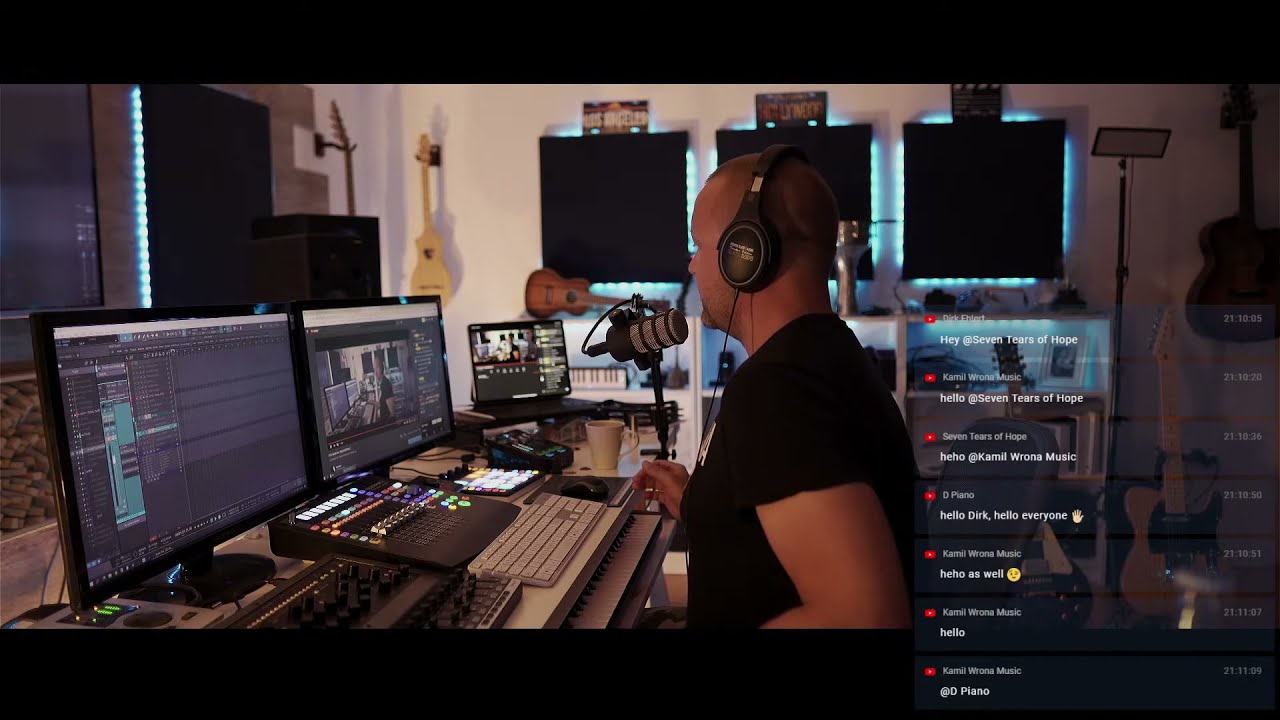 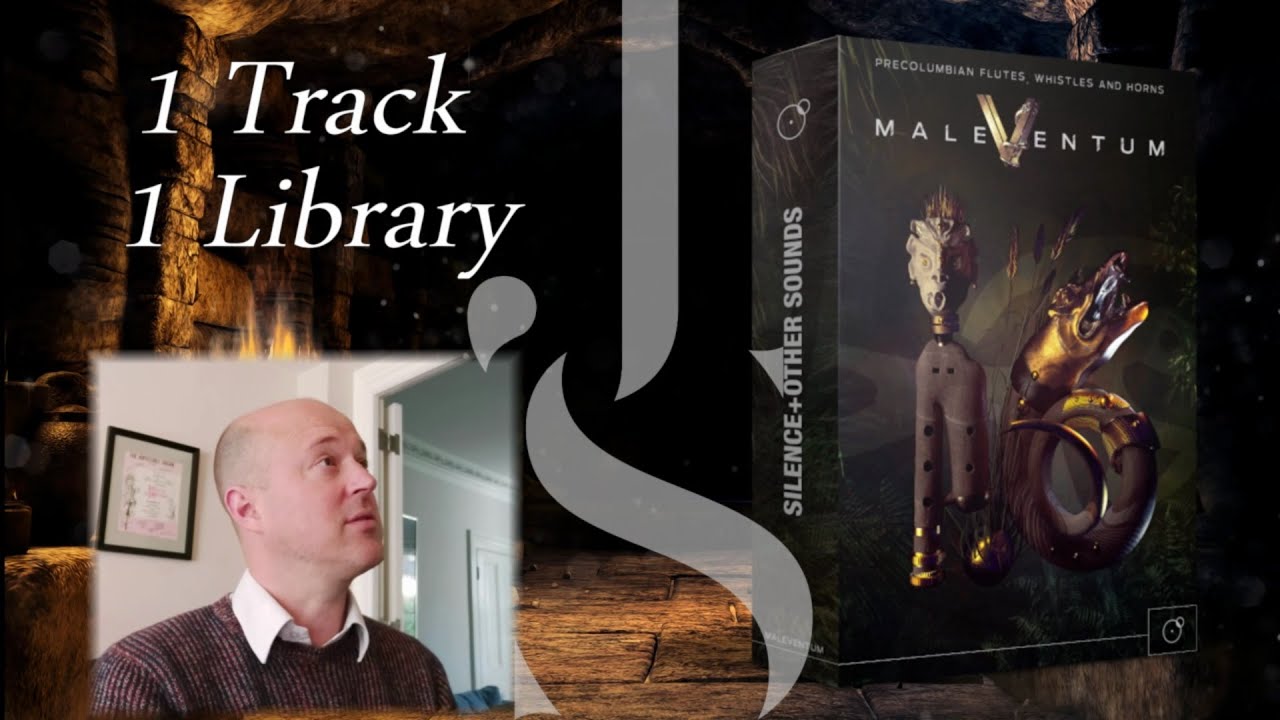 MALEVENTUM 2 by Silence and Other Sounds. Flutes and Didgeridoos!! WALKTHROUGH and DEMO 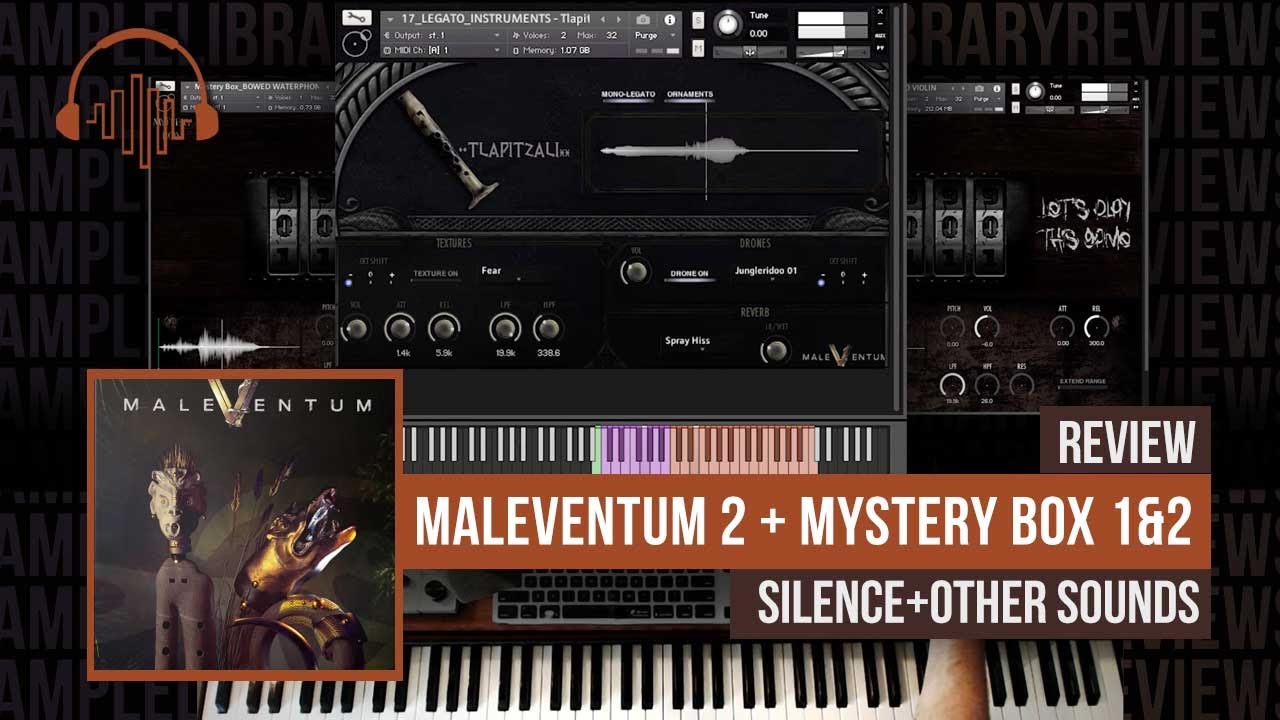 Review: Maleventum 2 + Mystery Box 1 + 2 by Silence and Other Sounds

Maleventum 2 is a Kontakt library inspired by ethnic flutes from ancient native American pre-Hispanic cultures. Following the popularly acclaimed Maleventum 1 based on Viking war horns, we’ve collaborated with Nomada Ceramica, a collective of musicians and instrument makers from Argentina, committed to faithfully reproduce flutes from the Aztec, Maya and Incas civilizations of over 3000 years ago.

All these instruments are literally unique pieces based on the archeological finds in Quimivil, a region in Argentina which hosts one of the most significant sites of the old Incas civilization.
The collection also includes samples from Kaval, a shepherd flute typical of Romania and Turkey, with an unique sounds that fits the epic genre very well.

Maleventum 2 is for TV, film and game composers and sound designers looking for unique, carefully crafted sounds to enrich their compositions. It fits particularly well the epic genre, with specific regard to fantasy and dark age movies. It will be a very useful tool to provide plenty of inspiration for horror and thriller composers as to producers of dark electronic music and ambient.

Maleventum 2 features a total of 20 Kontakt instruments: they’re organised in 2 different kind of .nki with different look and functionalities.

– 16 MPE compatible Kontakt instruments based on flute phrases and one-shot SFX, which allow you to turn any sound in a playable pad or texture. There are over 250 snapshots and 85 MPE Multis, where you can combine the phrases samples with pads and textures. If you own a Roli Seaboard, Maleventum 2 has been scripted to create evolving, rich hybrid phrases and pads by blending the layers and simultaneously controlling a vast amount of parameters at your fingertips. Maleventum 2 can be also used in standard MIDI and it’s compatible with any MIDI controller.

The 16 phrases and sfx instruments include ethereal cinematic flute phrases, Aztec panflutes and whistles, aboriginal hunt calls, spiritual flute phrases, flute screams and dissonant stabs, death whistles and didgeridoo droning backgrounds. By using the looping function (independent for each sample) you can turn any phrases or SFX in an evocative playable instrument by looping the tonal regions within each phrase.

Maleventum 2 also features 4 playable legato instruments, 3 of which based on meticulously sampled original Native American flutes and another one on Kaval, an overtone flute peculiar of the shepherd tradition of Romania, Moldavia and Turkey. They are meant as realistic ‘translations’ of these unique and rare instruments in the digital domain, which capture some peculiarities of the iconic Native American sound and Epic genre.

By using the ‘Ornaments’ button, you can introduce slight variations within the legato phrases to further increase the realism and detail of these instruments.

The 4 legato instruments also allow to add a further layer of organic tonal textures, which have been obtained with a number of sound design techniques applied to the original sounds. This can open interesting possibilities of sculpting the sound in a variety of ways, experimenting interesting blends, and more generally adding a more modern character to these instruments.

Expect these instruments to sound raw and primal!
The legato instruments do not feature MPE.

The 16 phrases and SFX instruments in Maleventum 2 feature two functionalities called ‘Extend’ and ‘Loop’. With ‘Extend’, you can select a sample and extend its range to 4 octaves on the virtual keyboard, with ‘Loop’ you can loop the tonal region within the sample and transform it in a long, sustained playable element. ‘Loop’ can be turned on/off and individually set for each phrase or SFX sample. Moreover, by using the Mapping Screen, it’s possible to easily control the offset and loop length for a given sample, so to introduce continue variations and avoid the ‘static’ feeling that might result when the same sample is played chromatically along the keyboard.

In the phrases and SFX modules, you have independent control of Volume , Pitch, Volume Envelope , Filters and Loop for every individual sample.

Moreover, with the useful Global Tuning function you tune ALL the samples to the same root key with just one knob, which turns very useful for more minimalist and aggressive compositions such as trailer music.

MPE is the acronym of MIDI Polyphonic Expression. It is a specific MIDI technology which enables multidimensional instruments (for example Roli Seaboard or Haken Continuum) to independently control multiple sound shaping parameter for each individual note.
Maleventum 2 supports MPE: you can easily MIDI map Volume, Low/High Pass Filter, Sample Start and Loop Length in the 16 phrases and SFX instruments by using the Mapping screen. All of these parameters can be controlled per note, allowing you to create custom patches of rich, evolving end expressive pads and melodies from over 290 phrases and SFX , 67 textures, 85 MPE Multis and 250+ Snapshots. To discover more about the MPE implementation of Maleventum 2, please consult our free manual.

Maleventum 2 is compatible with any MIDI controller, you don’t necessarily need an MPE-compatible one and you can map the aforementioned parameters to the MIDI CCs of your controller.

Be the first to review “Maleventum 2” Cancel reply